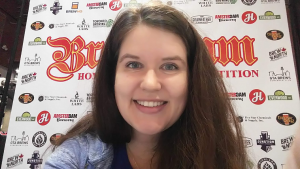 Short answer: I am a scientist.

Long answer: I am a researcher in photonics. Think electronics, except I deal with photons instead of electrons. I shine lasers at liquids and then look at the scattered light. The light tells me what’s in the liquid, and how much is there.

My partner Rob saw a homebrew kit at a grocery store in Vancouver. My Dad is a homebrewer, so I knew what we were getting into. A quick trip to Dan’s Homebrew Shop later, and the hobby has consumed most of our apartment for about 6 years.

I am an avid runner and love to sew.

I’ve been brewing about 6 years. Last year I did a dozen or so batches.

I have a RoboBrew BrewZilla.

I got a brew-in-a-bag kit for my first all-grain brew. I was stoked. I had a few beers before brewing. I didn’t read the instructions. I boiled the grains. And it turned into this grainy… spongy… gelatin-like compound. It didn’t even make it to the wort chiller.

Current favourite is my house stout recipe, Planck’s Constout. It was designed to toe the line between an American Stout and a Black IPA. The name comes from Planck’s Constant, which relates a photon’s energy to it’s frequency or wavelength. The name is supposed to be reflective of how photons have a dual nature as particles and waves, and my beer has a dual nature as a stout and an IPA.

Temperature control was a big one. Both during mash and during fermentation. And of course… reading recipe instructions.

What is your favourite yeast, grain, and hop?

What beer is your white whale, one that you’ve been chasing to perfect?

A clone of St Ambroise Apricot Wheat. I’ve tried a few iterations and just can’t nail it. Fruit beers are tricky (and expensive) to perfect.