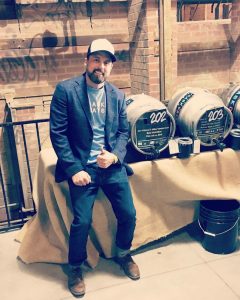 I am a Police Officer with Toronto Police Service and am currently working in the Jane and Finch community. Don’t let the media scare you it is actually a great community and I really enjoy working there.

I did a university exchange to the Netherlands for a year. Every Friday (ok, maybe Thursday and Saturday too), a group of us would each purchase different beers from around Europe. I attempted to start that here with a group of friends when I got back and one said, “Hey, why don’t we make it?” Enough said.

I play hockey, snowboard, and pretty much anything else that can get my adrenaline flowing.

I have been brewing for about three years. I just recently hit the obsession level this last year and brewed about 40 batches.

IPA and IIPA! Why? Hops! Question from any brewer I know. How much hops are in this? Answer: A lot! What do you think it needs? Answer: More Hops!

I submitted an APA to a competition: Feedback, well that was aggressively hopped!

I use a 20 gallon Spike Brewing turn-key system. I can produce 6 gallons to 14 gallons per batch.

An IPA! It was my first one and second beer ever. Amazing how an IPA turns out bad when you don’t know anything about fermentation temperatures, sanitation and ferment it in direct sunlight.

After that horrible beer I was hooked and bought my current equipment. I read everything I could and became obsessed! I learned that failure just made me want to improve every time. It’s the first hobby I have had where I see failure in a beer as a positive because I learn so much. When you get it right the first time you don’t learn as much.

As Nuke LaLoosh would say: That was beautiful, what I do?

The best beer I have brewed is called Hurricane Nat IPA. It’s a juicy hazy NEIPA that is so hoppy that you smell it when you open your taps or bottle!  I have done a few variations of this beer, changing up the hops and grain bill. It won a few golds at Brew Slam including, gold in IPA, gold in Specialty IPA with the DIPA, and then gold in fruit with the Mango IPA and bronze with a Papaya IPA. Sooooooo here is the recipe. Sharing is caring!

Temperature control cannot be understated! I recently started using pure oxygen and my fermentations have been crazy. If you are doing IPA’s and especially if doing NEIPA’s, limiting contact with oxygen will make a huge difference. Think oxygen reduction in every step on the cool side.

I’ve drunk an obscene amount of beer around the world. Does that count? I should attend meetings if I wasn’t so busy drinking. Oh wait do our GTA Brews meetings count?

If you could be a tree frog, what colour tree frog would you be and why?

What happened to the good old days when frogs lived in swamps and made socially awkward noises that we couldn’t locate?